The next morning was again beautiful with clear blue skies. I hiked from the campground to the Storfossen waterfall just as the sun was cresting the mountain. The sunrise made for some amazing pictures. The water was cascading down the steps of the falls with the sun sparkling off the foaming water. 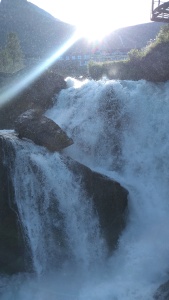 After breakfast we continued up the mountain on Route 63, toward another fantastic, not-to-miss pass. With great pavement and sweeping curves we climbed toward two large waterfalls, the Kvanndalsfossen and the Forfriskendefossen. We stopped briefly to look at both falls and headed to the top of the pass where the road turns left and winds steeply to the top of the Dalsnibba Mountain Plateau at a height of 1500 meters (4291 feet). The views are incredible in all directions. Feeling like we on top of the world we just stared out in amazement.

Continuing on, the road runs along the crest of the mountain providing incredible views before heading downhill to another small fjord, the Innvikfjorden. There is an arm of the Jostedalsbreen glacier that feeds a river to two glacier lakes on the way to the fjord. I saw several camping areas on the lakes, one being next to a small bridge, crossing the river connecting the two lakes. They had a great spot for us right on the lake looking skyward to a small glacier just across the river. Canoe rentals were available, and the price was, FREE! We hopped in one and canoed the length of the second lake to see the large glacier from the water. It was spectacular!

The next morning, we rode toward the glacier, and the end of the road. We decided not to hike up as we didn’t want to leave our gear in the parking lot, so we continued. We have an Austrian friend, Anita, that was near us and we had decided the tonight would be the best day to meet and camp together. 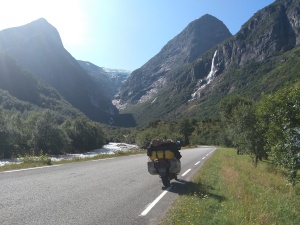 There are a couple stave churches on the way to Flam. One of them is a UNESCO Romanesque church, the Urnes Stave Church. It is listed as the oldest stave church and was built around 1130. There is a ferry crossing to get to the church, so we passed and went to the other one. The other one, the Borgund stavkyrkje (stave church), was built around 1190 on stone foundations, is exceptionally well preserved and is the most distinctive stave church in Norway. The church has beautiful, lavishly carved portals, five carved crosses and dragons on the roof. The area surrounding the church is rich in cultural heritage. The Vindhellavegen, part of the King’s Road across Filfejell is designated one of Norway’s most beautiful roads. 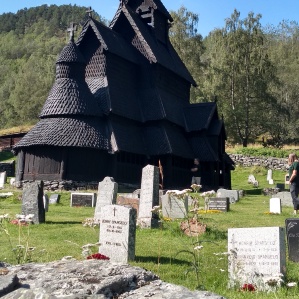 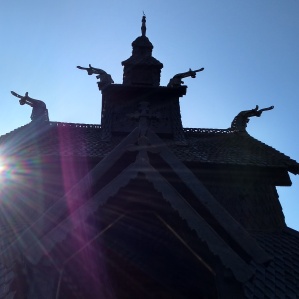 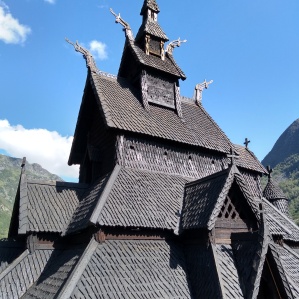 We backtracked a few miles to a crossroad of old and new. The new Lærdalstunnelen is the longest road tunnel in the world. The tunnel is a 24.51-kilometre-long (15.23 mi) long road with blue-lit rest areas and speed averaging, so be careful, speeding tickets are expensive in Norway. The old road FV243 climbs over the mountain offering spectacular views and a picnic/hiking area at the top. We had lunch fixings with us, so we took a break and enjoyed the sunshine and the views. 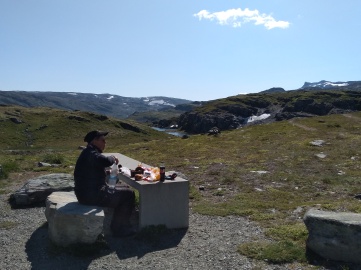 Anita is part of a team of female riders, the Grizzly Race Team. The team set a woman’s world record in 2018 for riding around the world. She was riding to Nordkapp with her friend, Yvonne. They were moving quickly, as would be expected, and made time in their travels to camp with us for the night. They arrived later in the afternoon. After setting up their camp at Flam Camping og Vandrarheim we headed into town for some chow and a few beers. We had a wonderful evening with good friends and in the morning, parted paths. 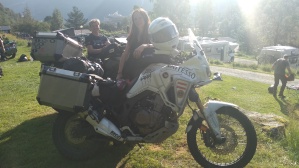 We were catching the ferry out of Bergen in a couple days, so we found a campground on the outskirts of the city. The first night we set up camp but the next morning we checked to see if there was a cabin available. Since we had to catch the ferry first thing in the morning, we decided a cabin would be easier. Yes, there was a nice small cabin available so we could move over immediately. We tossed everything in the room and grabbed the bus into Bergen.

Public transportation is so easy over here once you understand it. Getting to town was easy as the bus stop was right across from the campground. We bought our ticket ay the gas station out front and went and stood at the bus stop. I followed our route on map.me and when we got close to downtown, we jumped off. Getting back was a different story. We got on the wrong bus at got off at the next stop. We thought we then knew where we were going. Nope, wrong again. I had to convince Melanie I finally got it figured out. We only had to walk one mile, in the rain, to get back to where we had gotten off the bus coming into town. Great! Only 45 minutes until the bus gets here. Time for lunch, a beer and chips.

But, back to Bergen. The downtown area was very scenic. There was a large four-sided memorial in the square dedicated to the sea farers throughout history. The wharf area has an expensive fish market just as you arrive. The prices were outrageous, and the market was full of cruise tourists. We didn’t eat there as it was definitely out of our budget, hence the gas station beer and chips for lunch. On the far side of the wharf was an area referred to as Bryggen. It was the old medieval wharf in the historic harbour district known for its colorful, wooden-clad boat houses. Standing on the other side of the harbour we were able to get some wonderfully scenic tour guide photos. 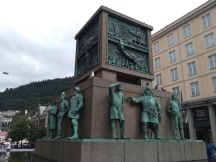 The next morning, we packed up the bike and headed to the ferry port, destination Denmark. 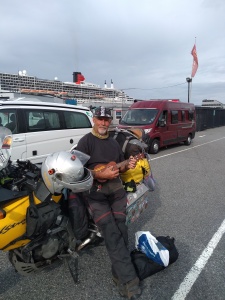