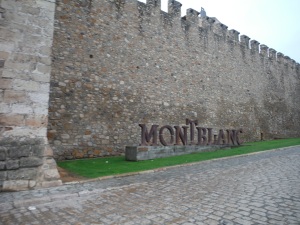 Our gear is finally dry so we headed into Montblanc, an area that has been inhabited for thousands of years. After the invasion of the Moors in 711 AD, the 10th and 11th centuries led to a period of peaceful coexistence of Muslims, Christians and Jews. This productive period continued  until the Roman Catholic Church initiated an era of expulsions, which forced the Moors, the Jews and many of the interbred mixed race peoples to leave the Iberian peninsula. We were able to ride through the gates of this walled city and wander freely along the cobblestone streets stopping to snap a few photos of the ancient buildings and churches, waving at the many people that smiled and waved at us as we passed.

Leaving Montblanc we rode a short distance to the Poblet Monastery from 1151 AD. Poblet was the royal pantheon of the kings of the Crown of Aragon. In 1318, under solemn oath, it was made a condition that all the Aragonese kings be buried there. Some of the most important royal sepulchres have alabaster statues that lie over the tomb. The kings have lion sculptures at their feet, while the queens have dogs. Poblet Monastery has been a UNESCO heritage site since 1991. Our tour included access into the monks chambers and also their private areas. This place was amazing. 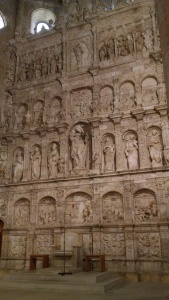 Stopping for lunch at a gas station offered a touch of life along the river in a small village in Spain. The gas station had a small cooking area offering fresh-water delicacies found in the river in the area, including snails. The wonderful ladies working in the kitchen offered me a taste of the various delicacies and I decided on a bowl of snails cooked in a thin, clear garlic broth. One of the ladies was from England so we had a brilliant time kidding with each other and us learning about why she had ended up here. Melanie ended up eating a couple local sausages and both lunches were excellent.

At a table near us a group of men were playing games and discussing local events. They didn’t speak much English but we had a good time with everybody using our limited Spanish and hand gestures.

The day remained cloudy with occasional rain which turned into rain followed by small pea sized hail. After having enough of the weather we decided to find a hotel for the night in Utrillas, the Hotel de Utrillas.

The morning brought blue skies and the promise of a great day. Our ride followed the side of a ridge of mountains and curved in and out on deserted roads, except for motorcycles, on the way to Cuenca, and the Cuenca Cathedral, the Cathedral of Santa Maria Maggiore. Work began in the year 1196 and was completed in 1257. The interior is in the Latin cross configuration with a central altar, a choir area with pipe organ and many individual chapels around the perimeter. The cost to tour this brilliant place was only 3,80 Euros.

We had lunch and a beer at one of the many cafes in the street  outside of the cathedral. Several couples were enjoying the views of the old town in the shadow of the impressive Cuenca Cathedral just 30 meters away.

We left and rode into Toledo, into the walled portion and up to the top of the hill looking for a place to stay. The roads were tight and cobblestone with some busy traffic and most of the places were full, so we continued on. It was starting to cloud up again threatening rain and we found a little cabin at a campground on the river on the outskirts of town, the Camping El Greco. I laid all our gear out to dry and walked to the restaurant for a bite to eat. Just after ordering the skies opened up, which had me sprinting up the dirt roads while avoiding the large mud puddle forming from the downpour. I gathered our gear and had to wait for several minutes for the rain to let up before heading back to the restaurant. So much for dry gear but tonight, after a good meal and another inexpensive bottle of red wine, I will sleep like a baby. 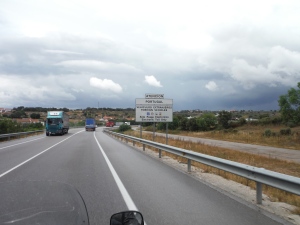 The next morning was overcast and we decided that our southern route through Spain would have to wait for another time,We were just running out of time and to go that far south, I wanted to spend at least a week in Morocco, wasn’t going to happen without sacrificing the northern coast of France. Next time. The west coast of Portugal would have to wait also, but the northern coast of Spain and northeastern area of Portugal would get fair treatment in the next few days.

As we crossed into Portugal a toll road sign was posted which had me making the first turn off the road as I could. Toll roads, in my experience, means more traffic, less small towns and less friendly people. We came across a road marked as N-222 which headed the direction we were going. A side note; this road popped up on FB later that night as one of the top driving roads in the world by a car rental company. Better to be lucky than good. Anyway, this road was brilliant as it passed through several small towns. Since it was getting on in the day and we wanted to stop and enjoy some sights and people in a small town we saw a sign for lodging. Pulling into a small village on a cobblestone street the road got very narrow and steep. The room for rent had long since been abandoned and their was no way to go but forward. After a few close calls on the steep, uneven and off canter streets we came to a section that was at about a 45 degree angle up around a crazy off-canter right turn and disappeared out of sight, still going up. Melanie wanted off, so, under protest, I let her get off. Smart lady. I gunned it heading up to discover as I near the turn I didn’t have enough room to turn. Jamming on the brakes and laying on the tank I grabbed the front brake as I needed both feet on the crazy angle and I didn’t want to flip over backwards. After sliding backwards several feet I finally stopped. I knew I couldn’t slide all the way back down the hill and up was the only way out. I let off the brake slightly, moved an inch and slid three. Finally I got positioned for the turn and laying on the tank took off determined not to stop till I got to the top of whatever lay ahead. I finally made it and shook until Melanie walked to the top. Lesson learned, when Melanie wants off, no discussion, let her off.

We rode to the next town and found a top notch hotel and the kind lady at the desk gave me a two room suite, with breakfast, for only $35 US. Walking into town we came across a street vendor who must have been a Portuguese comedian. We order a couple of his specialties, sausages, and had a fun time joking with him and his customers as they came to the stand. It was a fun night.