This blog is ahead of schedule but needed a page of its own. 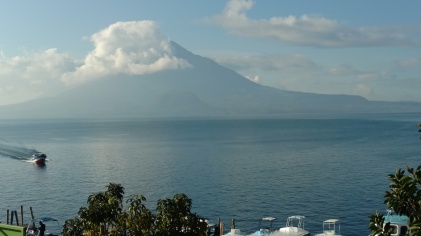 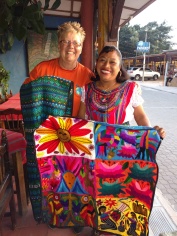 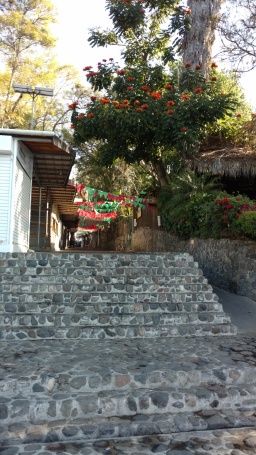 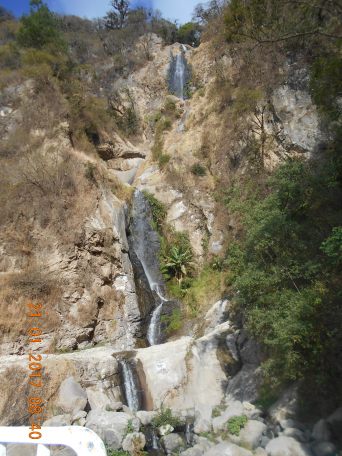 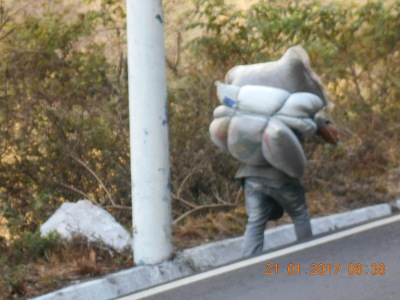 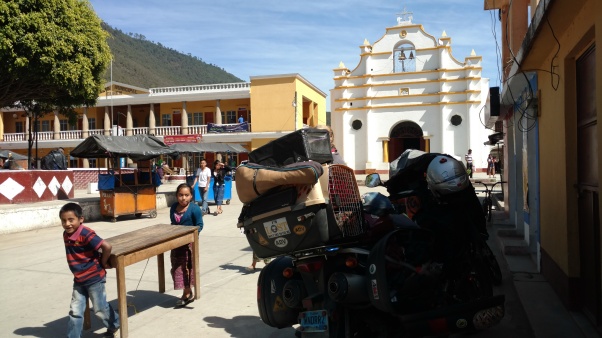 Well, the day started off innocent enough, leaving Panajachel at Lake Atitlan. First a ride the wrong way up a one-way street, whistle blowing and security motioning me to turn around on a crowded market street. Remember folks, the load I have. The people started to gather as the gringo was attempting to back up and do a five point turn to head the right direction. As I got the rig straightened out another whistle from a young female, police looking official who motioned me to pull over on the side of a very busy street, effectively blocking anything other than a Tuk-tuk or scooter from exiting the market. We climbed off the bike and retrieved the paperwork she had requested. Now, she only spoke Spanish and was rattling off a bunch of things I thought were probably felony charges against me that would give me some free room and board, sans tequila. The original security guard tried to intervene and I heard turista mentioned a couple times with the associated hand signals and she was just dismissed. Finally, as the cuffs were getting ready a man who worked for the organization, Mayan Families, as an interpreter, came to my rescue. He told me in English, which she didn’t understand, that a ticket is no big deal with my plates, just leave. Then he turned to her and asked her in Spanish what the issue was. She told him that she felt sorry for me as a tourist and wanted my information to give to the local police so they would know to help me when they see me around town. I almost fell over! Melanie hugged her and we said our Gracias’ and about that time a large bus laid on the airhorn so he could get by. ADIOS Pana! 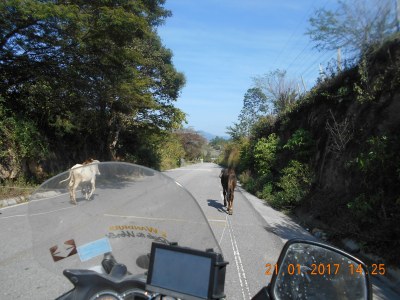 The route I had chosen to get to Semuc Champey had avoided Guatemala City and went through the mountains to see the real Guatemala that I didn’t get in Pana. All the intel I could gather showed OK roads. Man, was I WRONG. The route showed an arrival time of 4 hours and 20 minutes, about 260 kms. That seemed to be no big deal as we had all day. Well 3 hours later we had gone a little over 120 kms and the road had been bad with huge pot holes and enormous, bash plate smashing topes, or speedbumps, some at least 8 inches tall. You get to the little towns and the GPS has no clue where to go as blocks are usually closed around the square due to markets and roads are one way without reason. So, you turn this way and that on crowded, cobbled roads at best hoping to come out of town near your exit road. As we were negotiating the crazy roads we commented to each other about the looks on the faces of some of the people we met on the road. Some would give us a thumb up or a wave. But several times we saw women gathering their children to them and looking at us with terror in their eyes. We would wave but it was sad to see. Here we were worried about what we might find on a deserted back road and they saw us as the threat. 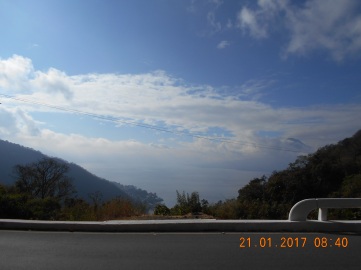 So anyway, the roads continue to get worse by the kilometer until any semblance of pavement was gone. Now, I used to do a bit of off-road riding but never with this kind of special load, that I love dearly, and don’t want anything to happen to them. The road went from diesel in the road (another pucker moment in a corner), to gravel, to lose gravel climbing steeply with water crossings, to a grated bridge, then things got bad. 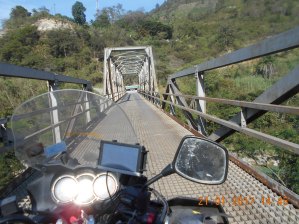 There were large boulders blocking parts of the road, landslides, a fire, then we came around a very steep corner on soft silt covering the road to a blocked road where a couple of mining trucks couldn’t pass on a very narrow, steep section. I grabbed the front brake as I needed my feet to keep us from falling and, you guessed it, started sliding backwards so hit the kill switch and let out the clutch to stop us. 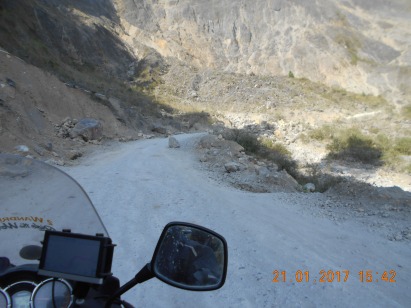 Melanie jumped promptly off, (you remember Portugal?) and started up the steep incline to see what the problem was. There was a small strip of road before the drop-off that I would have to negotiate if I could continue. I guess the trucks just could make it and Melanie said to come ahead and keep going until it got safe. OK, let’s give it a go. I started the bike and let out the clutch and the tire just was spinning in the silt, so I stopped. Again, I tried and with much tire spin and ass puckering I made it up over the rocks and past the trucks to a safe place. Melanie climbed the hill to me and we continued on our way. We checked our poor Gypsy frequently and one time, after a bad rocky section, the poor thing was UNDER her pad and blanket just sitting there. She is a great rider and still always like to get back on and go. 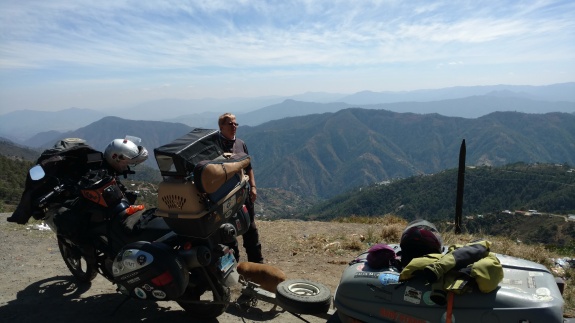 Well, after 100 kms of these conditions, and almost 9 hours, we finally made it to our $25 a night hostel, which is considered a B and B, with comfortable accommodations and excellent hosts.  You can follow this track at https://spotwalla.com/tripViewer.php?id=12d425833415c98acf&p=2WANDRRs17 .

Cheers, and Buenas Noches from Guatemala