Time for another border crossing. I think we have all our papers and copies ready as this will be our first true Central American border crossing. We have spent the night a little over an hour away from the Guatemalan/Honduras border hoping to get across and into our destination for the day, Copan. We arrive at the border without any issues and get our paperwork painlessly processed and get stamped out of Guatemala and ride the short distance to the Honduras border. We are directed to a safe place to park our bike and get Gypsy out and start the process. I go first and get my passport stamped, bike registered and insurance purchased without any huge problems. They just don’t know what to do about my trailer, never had one come through being pulled by a motorbike before. They finally agree that is doesn’t require any additional paperwork. Then on to the agriculture side to get Gypsy processed.

Well, it was going smoothly. Seems like us and all the Veterinarians we have seen this past year getting ready for this trip overlooked one small detail, a vaccine needed for a few of these countries. After talking back and forth for quite a while we are at an impasse, Gypsy can’t get her paperwork without that vaccine. The guys are nice, trying to work with us on Google translate. The boss decides that if I leave my PASSPORT, which I never would do, Gypsy and I can ride into the next town, try to find a vet who has the vaccine and get Gypsy vaccinated. Melanie and I discuss this with them and it is decided that I can leave Melanie in lieu of my passport. Humm, never thought I would have to do this but I never expected to make Melanie hitchhike in Croatia either.

Giving Melanie a kiss, Gypsy and I set off to Copan hoping that there is a vet in town with this particular vaccine. The road into town is lined with trucks queuing to leave the country leaving only one lane, sometimes less, for both directions of traffic. Between this, the rain, and large pieces of road gone due to washout, it is an interesting ride. As we arrive in the small town square I am approached by a man trying to sell me a tour and he is nice enough to direct me to the nearest vet. The tiny shop also has a nice older woman running the store. I show her Gypsy’s passport and the name of the vaccine she needs. As usual, she has no idea of what I am saying but a young man walking down the street sees my motorcycle and hears me speaking English and comes in to the store to give us a hand as a translator. Well it turns out that she does not have the vaccine but can get it at 3pm, it is now about 11am. She will order it for me and I go back out on a quest for the vaccine. Stopping at the other 3 places in town I discover that no one in town has this needed vaccine.

I head back to the border to find Melanie slumped up against the wall running a fever, she caught what I had in Lake Atitlan.  Back at the Ag building they agree to hold my passport as ransom for the vaccine.  Loading Melanie up, we head to town in search of a place to stay so she can rest. We find a nice hostel on the edge of town across from the cemetery for $US18 per night, with an older man and his wife running the place. Gypsy and I head back into town to see if her vaccine has arrived yet, I have little faith in it being there. We are greeted at the door by the lady running the store with the vile and a syringe in her hand. She indicates for me to pick Gypsy up and put her on the counter as she draws up the clear liquid from its container and, while I hold Gypsy still, injects the serum into her hind quarters. The total cost for this service, $US3. We ride back to the border, again, to show the sticker on her passport indicating her vaccine. The guys all gather around to look at it saying this is the first time that they have let anybody through to do this a with that person being successful. I gave them all the information of the vet used for future reference. 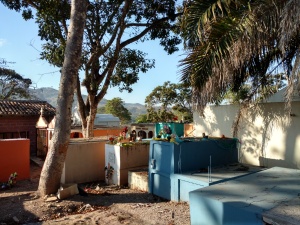 Cemetery across from the hostel 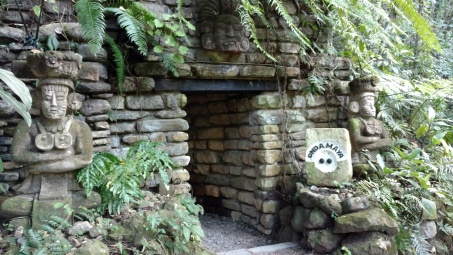 Three days pass before Melanie feels like she isn’t dying and can walk around town and get something to eat. In the afternoon, we take a shuttle to the Jaguar Spa and hot springs. This is a neat little place in the jungle with water temperatures at the origin of the hot springs about 190°F. 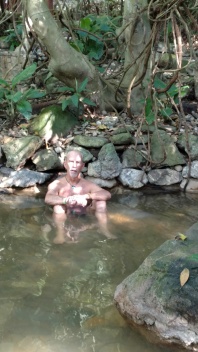 Melanie waiting for her massage

This place has several pools, each with a different purpose and Melanie gets a much-needed massage high up on a platform above the rising steam of the springs. It is a relaxing afternoon chatting with a young traveler backpacking around Central America from Vancouver, Canada.

Carved steps at the Temple

The next day we head to the Copan Ruinas, one of the great centers of the Mayan civilization over 1000 years ago. This beautiful site has some of the most impressive pre-Columbian art anywhere in the world.  When we got close to the entrance gate, we are welcomed with a fabulous display of dozens of Macaws.  They are a brilliant red with a mix of vibrant blue, yellow, and green feathers.  Spectacular to see them gliding overhead. 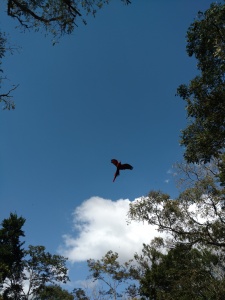 We spend the better part of the day exploring this ancient site before heading back to town. There is a place on the map called ViaVia, which describes itself as a gathering place for travelers to meet, eat, sleep and hangout with locations around the world. 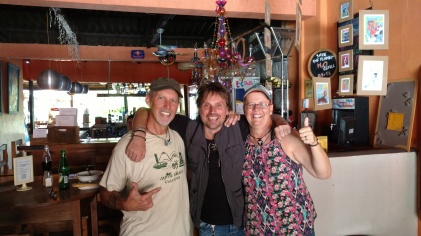 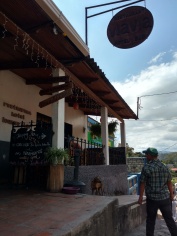 The owner happens to be there and comes over and joins us and when we start talking we discover we have a mutual friend, Pete Day, owner and designer of Mosko Moto, soft luggage for motorcycles. It seems that Gerardo ViaVia and Pete were riding around where there aren’t roads, typical for Pete, on the southern Honduras/Nicaragua border on the Costa de Mosquitos. Soon after Pete was in the design/testing phase of his new off-road soft luggage and the name, Mosko Moto, popped up from their ride. Cool, huh. If you ever get in this area pop in and have a beer with Gerardo, good times.  We were directed to a German brewery in town that was owned and run by a guy from a small town in northern Germany that we had never heard of.  His beer was amazing and the food was exactly like we had enjoyed while traveling Germany last summer.  The surprises you find in the jungles of Central America never cease to amaze.

The road out of Copan is rough with potholes and dirt and with the rain they turned to mud. Our route will take us north through San Pedro Sula before turning back south. San Pedro Sula is known as the murder capital of the world, hence given Honduras that similar title. We are told that most of the cocaine trade of Central and South America headed to the US and Canada comes through this city near the northern coast. As we near the city we are stopped at a military checkpoint, our bike searched, and we are warned to turn around as this is a dangerous area.  I think they really wanted to check out the bike because the search was just for show. Taking their advice seriously we continue to San Pedro as we want to explore the area south of the city, and the ride is beautiful through the mountains. Stopping for fuel a couple kms south of the city we are surrounded by a bunch of guys on motorcycles. They want to talk about all things bike and travel related and after about 30 minutes we continue to a real cool hostel called the D&D Brewery, serving the best beer in Central America. 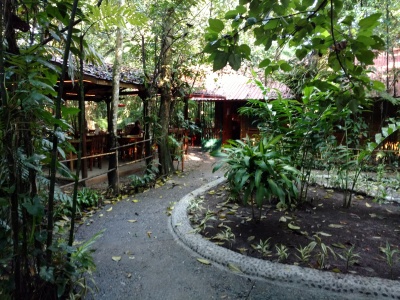 We end up staying for a couple days hiking the surrounding area and drinking small batch craft beer.  There is a waterfall just before we come into town that was a great stop. 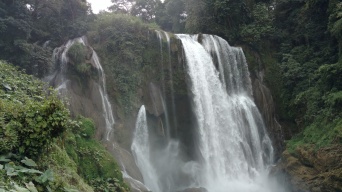 The first night at the hostel, we had a couple of guys on a mission to find the riders who came thru town that day pulling the trailer with a dog on the back. They were from Nebraska, in town doing volunteer work at a local orphanage. They saw the bike and had a good idea that we were at the Brewery. After a couple hours of getting to know each other, they headed back into town. They were back the next night with more conversation to be shared.   It is evident that we live on a very small planet because we found a mutual connection in Chattanooga, Tennessee. How does it happen in the middle of nowhere Honduras that you can these things happen?  We have heard these stories but when it happens to you….it is mind boggling.

On to Nicaragua and the toughest and most costly border crossing we have ever had, thanks to a dog and trailer, but that is for the next post.