Ha Long Bay, One of the New 7 Wonders of Nature

Leaving Huê, we took the overnight sleeper bus to Hanoi. The bus let us off on a empty street in Hanoi at 5:30 in the morning. We made our way to our hotel which was down an alley in the middle of the city. The city was already alive with a mix of people, scooters and vendors. In the alley people were making Pho for breakfast and eating in the street alongside butchers cutting up fresh meat for the day.

From Hanoi we took a bus and ferry to Cat Ba Island, which is a large island in Ha Long Bay. 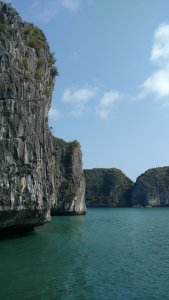 Ha Long Bay has been a designated UNESCO world heritage site since 1994. The bay features around two thousand towering limestone karsts and tiny islets topped by rainforests rising from the emerald waters of the Gulf of Tonkin in Northeast Vietnam. There is a history of prehistoric humans in the area about 1,500 km² since 18,000 BC.

On the ride out to Cat Ba there was a young couple with two children on our bus. Just before getting on the ferry we were able to talk to them. They were from Germany and living in Australia. Several years ago, pre-children, they took a multi-year motorcycle trip around the world. They were familiar with Horizons Unlimited and we had several international, motorcycle traveling friends. 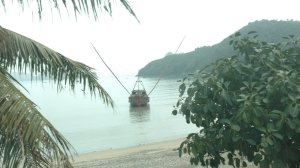 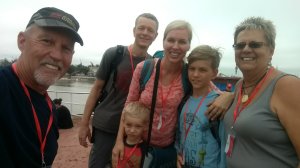 We arrived at our hotel which fronted a lake just off the bay. Our 6th floor room was fantastic with a balcony overlooking the bay which was full of small, colorful fishing boats and Chinese junks with large, square red sails. For a cost of 7 US dollars per night, including breakfast, it just couldn’t be beat. 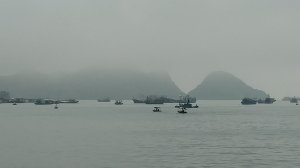 A large boulevard running along the bay separated the bayfront boardwalk from the restaurants lining the street. We walked along the waterfront checking out the beautiful crescent moon shaped bay and chatting with various restaurant owners about their food specials for the night. Walking by a popular restaurant we look inside and see Frank, who we met up with in Huê, sitting there. We decide tonight that we would like pizza for dinner and joined him for dinner, good craic and a few beers.

The the next day we decided to take a cruise through Ha Long Bay. For US$14 per person a bus picks us up at our hotel and takes us to the boat for a full day on the bay, including lunch. 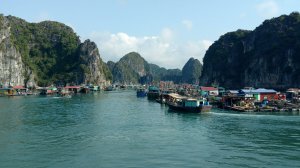 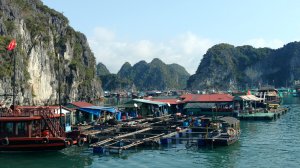 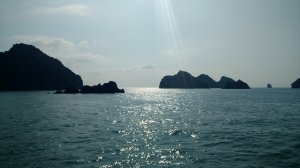 About 30 people from about 12 different nations sit on the top deck as we leave the bay, snapping pictures left and right. The conversations are engaging as we all get to know each other and learn about each other’s individual cultures. The views of towering limestone columns and green rainforest surround us as we cruise slowly east and north around the island, towards the main portion of Ha Long Bay. 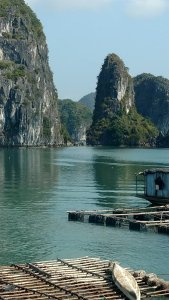 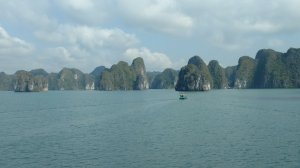 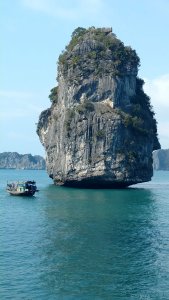 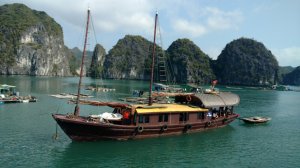 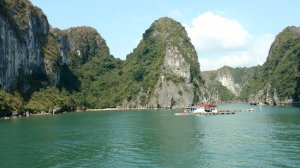 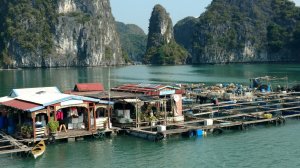 After about 3 hours our boat anchored in a small cove and we all had the opportunity to jump off the top deck into the cool, emerald waters below. Cans of beer were tossed in front of us as we jumped, a prize to sip on while floating in the beautiful waters below. I toasted to friendship and world peace with a fellow traveler beside me. Life is good! 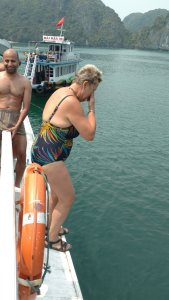 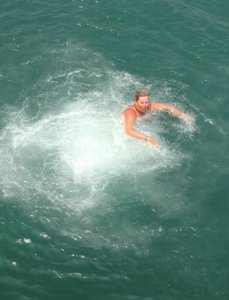 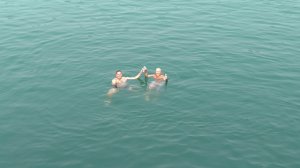 After the swim we all climbed back on the boat and gathered below deck for an incredible meal that was cooked while we were swimming. Our crew brought out plate after plate of vegetables, rice, cooked fish, squid muscles and tofu. The plates were placed on large tables where we were sitting. We passed the plates back and forth, laughing and joking with each other while trying to understand the accents of many different languages present. 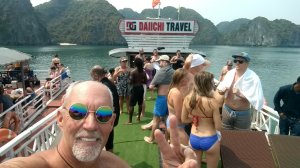 Our next stop was a floating village where we all got into kayaks to paddle through a couple of the many caves carved out of limestone in the bay. The front navigator person of the kayak wore a headlamp. We paddled through several hundred meters of pitch black cave with bats flying around us and just above our heads. 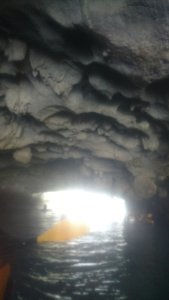 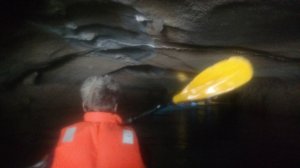 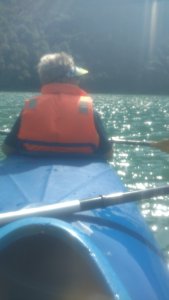 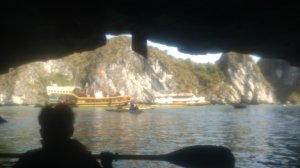 As we exited the cave and our eyes got use to the light again, we were in a small, peaceful bay surrounded by mountains. Large hawks seem to float above us rising gracefully on wind currents. We all sat silently in our kayaks, taking in the beauty of the moment and nature around us. 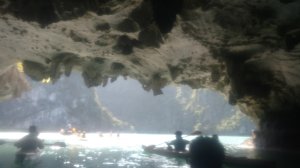 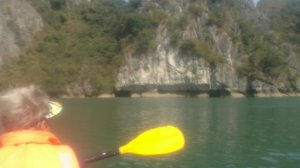 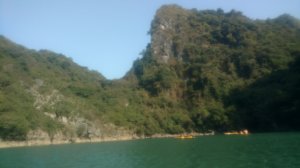 We ended up spending three more days on the island. Our day on the boat and cruising Ha Long Bay was so much fun, two days later we went out and did it again. 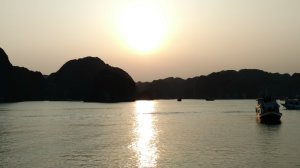 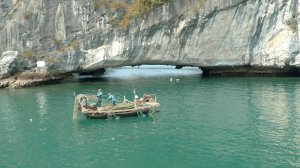 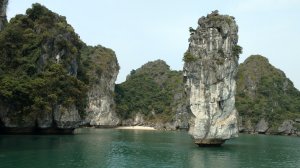