To have the privilege of staying at the Wyndham, that I was pressured into buying last year, I was forced to go to another sales pitch. You should have seen the salesman’s face when Melanie and I told him what we really thought about the property. He couldn’t get rid of us quick enough.

We jumped in our car and headed up the coast for the Polynesian Cultural Center. The drive was slow going but with the multi colored blues of the Pacific Ocean on the right and steep green, lush tropical mountains with the deep ravines cut into the sides on the left winding through the small towns, who wants to rush. Coming around a corner we come across the famous Shrimp truck featured on the food network. Pulling over we ordered a basic Hawaiian staple for lunch, two scoop rice and chili which is as good as ever.

Arriving at the Cultural Center we hop on a large double pontoon wood boat with two drivers that push us with wooden poles through the entertainment complex to the far end so we just have to walk back. We arrive just in time for a parade of boats celebrating the various Polynesian countries. Very well done with music and dancing. After the parade we wandered over to a Hawaiian show that was very well done teaching about the history of the Hawaiian culture. Between these two things and an incredibly well done movie about the island, I felt those were worth the price charged for admission. There is so much more to do you should time your visit to spend a whole day. 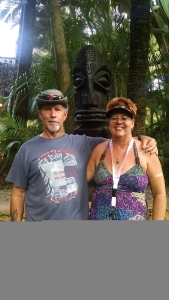 During this show I had thoughts about my own heritage, which I know nothing about. Here was a Hawaiian man talking about 1500 years of traditions and I couldn’t trace mine 3 generations. It must be humbling to be able to follow your heritage so many generations. As a country we must have one of the weakest feeling of belonging of most countries. We really are just a mixed basket of mutts.

We ended our day with a quick trip to north shore to watch some of the pro surfers tearing up the waves at Sunset Beach. Hungry now we headed to the other side of North Beach for a great pork and fish taco for supper at Killer Tacos, probably the best I’ve ever had.