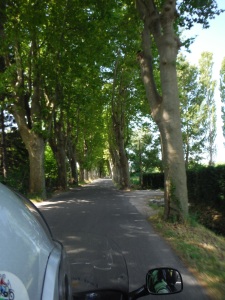 Our ride this morning passed through fields of lavender running in all directions. The roads were narrow, line-less asphalt stretching out in front of us with a canopy of old trees lining our route with manicured hedges finishing the perfect picture. I wondered why these trees were planted with such perfect precision, mile after mile cooling the air around us from the sun as it heated up the fields of lavender, grapes and other crops in the French countryside. Later in the day our questions were answered. The Emperor Napoleon is credited with originating the policy of lining French roads with trees, to enable his soldiers to march in the shade. 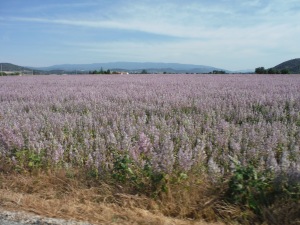 Flowers were everywhere as we entered the center square of Forcalquier and the Monday farmers market. There were a vast variety of vendor selling everything from garlic and more varieties of olives than I have ever seen to flowers and leathers and cloth goods. Melanie spent her souvenir bike space on a small hand-made leather change purse. Kidding. 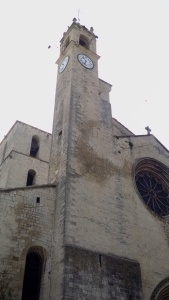 Church in the square 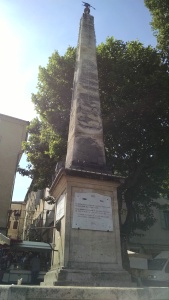 1235: To the memory of Eleanor De Prouvenco Fourcauquie, the wife of Henry the Third, King of England

We parked on the corner in front of the monument and wandered around, watching the people of the village checking out the bike and licence plate, talking to each other and wondering where we were from. 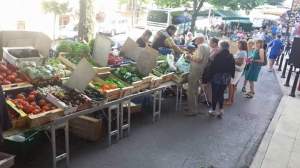 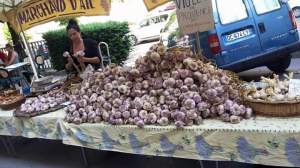 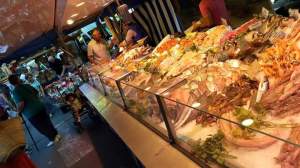 On our way out-of-town we decided to make a detour to the city of Orange and see the Roman Theater of Orange built-in the first century A.D. to seat 10,000 people. The Roman Theater of Orange is, without doubt, one of the finest remains of the Roman Empire and, as such, has been designated a UNESCO World Heritage site. It is, in fact, the best preserved theatre in the whole of Europe. The theater was closed for renovations when we were there but we got a couple of pictures. The second picture is from their website. 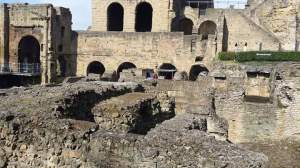 Back on the bike and on our way to Avignon we passed a winery that we had to turn around to see. In front of the beautiful building with some very unique sculpture were several old cars in wonderful shape sitting in the weeds and dirt.

Avignon, set on the Rhône River. From 1309 to 1377, was the seat of the Catholic popes, and remained under papal rule until becoming part of France in 1791. Its center, surrounded by medieval stone ramparts, contains the massive Palais des Papes and remains of the Saint-Bénezet bridge, also known as Pont d’Avignon. 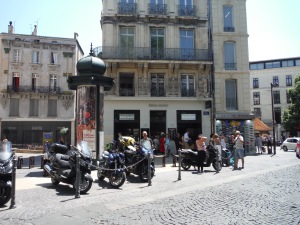 We rode through the gates of this walled city and down the cobblestone street taking in the history surrounding us. It was a very hot day and we were sweating profusely in our gear so finding a parking spot and getting this helmet and jacket off and finding a bottle of water were first on the list. The street was lined with ancient building housing shop and cafes with all the cafe having tables, chairs and umbrellas set up in the streets among the trees. We took off walking, still with boots and riding pants, and went to the Papal Palace and got in line to take a tour. The stone walls of this 900 year-old palace are very thick, keeping in the cool air and repelling the stifling heat on the streets. 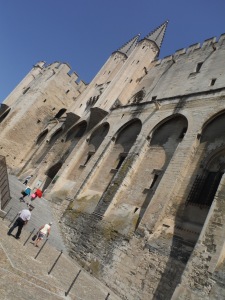 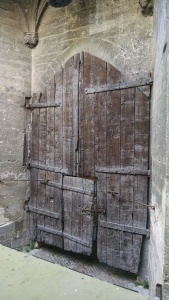 (From Wikipedia). The Avignon Papacy was the period from 1309 to 1377, during which seven successive popes resided in Avignon (in today’s France) rather than in Rome. This situation arose from the conflict between the Papacy and the French crown.

Following the strife between Phillip IV of France and Pope Boniface VIII, and the death of his successor Benedict XI after only eight months in office, a deadlocked conclave finally elected Clement V, a Frenchman, as Pope in 1305. Clement declined to move to Rome, remaining in France, and in 1309 moved his court to the papal enclave at Avignon, where it remained for the next 67 years. This absence from Rome is sometimes referred to as the “Babylonian Captivity of the Papacy”. A total of seven popes reigned at Avignon; all were French, and they increasingly fell under the influence of the French Crown. Finally, on September 13, 1376, Gregory Xi abandoned Avignon and moved his court to Rome (arriving on January 17, 1377), officially ending the Avignon Papacy. 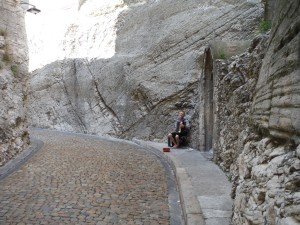 The Palace of the Popes is the biggest Gothic palace in the world. There are 15,000 square meters of living space, which is the equivalent of 4 Gothic cathedrals. The Palace of the Popes, part of UNESCO World Heritage, stands as the symbol of the church’s way over the western Christian world in the 14th century.

Leaving the palace after the tour we went out a door on the opposite side of where we entered and because of my keen sense of direction, (I was completely lost), Melanie was able to guide her front pillion back to the bike. On the was we passed this beautiful carousel. Not as nice as the one located one the Santa Monica pier, but beautiful non the less.

Driving a little further looking for a place to camp and eat we passes through the town of Uzès with its narrow, tree-shaded lanes and a quaint downtown area with cafe overflowing into the street. We found a nice little cafe next to a fabulous wine shop owned by a couple Brits. We chatted about each others lives and I ended up buying a bottle of wine, I splurged tonight, while I threatened to come back and open a wine shop next to his, the town was so nice. Next to us at dinner were a couple with a little baby from Colorado, I believe. We talked until almost dark and exchanged Facebook names and promised to keep in touch.

Hurrying out of town we found a nice little, closed campground. After two choices that ended up being occupied, we found a nice campsite looking out over a field and mountain. First thing, riding pants off, bottle of wine opened and camp set up.