Today we are just enjoying the ride thru the French countryside heading toward the ancient city of Carcassonne in southern France, north of the border of Spain. We will camp tonight in the town of Trebes on the banks of the L’Aude River at Camping à l’Ombre des Micocouliers, a wonderful little campground. We are just east of Carcassonne so we can get an early start to our day tomorrow exploring this ancient city. After setting up camp and doing laundry and having a couple of drinks we walking across the arched bridge into town and found a couple cafe on the waterfront with long, narrow boats tethered to the retaining walls. We asked our British camping neighbor to join us as he was there eating also.

The walled fortress city of Carcassonne is one of the most well-preserved in Europe. The first signs of settlement in this region have been dated to about 3500 BC with trade route established in the 6th century B.C. The Romans identified the strategic military importance of the hilltop area around 100 B.C. and built the first fortified structure around 450. There were several firsts of fortified fortress construction including a double wall and moat and the use of hoardings, or overhanging ramparts, from which to drop projectiles on invading armies.

The Cité de Carcassonne, a medieval fortress restored by the theorist and architect Eugène Viollet-le-Duc in 1853 and added to the UNESCO list of World Heritage Sites in 1997. Although the main industry is now tourism, a walking tour revealed to us the beauty of the long-standing architecture of this amazing place. The cathedral was built-in starting in 1067 and, in 1096, the foundation stones were blessed by Pope Urban II.

While we were in the cathedral a quartet of men from the Russian Catholic Church in St Petersburg were there and treated us to a concert sung in Russian and Latin in this acoustically perfect area in front of the altar. We were mesmerized while these four men sang in such perfect harmony. We posted a short video on our FB page is you would like to hear it.

While we were roaming the streets trying to imagine life here 1000 years ago we came across a small eatery serving cafe and strawberry/chocolate crepes . I bet this wasn’t on the menu in the day. We sort of split one but Melanie really enjoyed one of her favorite treats.

In the courtyard was an archeological excavation going on. Under one of the floors they had discovered tiles set during the time of Muslim occupation over 1200 years ago. The original colors in the tiles were visible and most of the floor and room were still intact. It was in an area inaccessible to tourists and I had to work to gain enough access to snap this picture, without the flash, of course.

We rode out headed to Andorra, excited for the climb into the Pyrenees which was a great, twisty, cold ride in the rain and hail. Pulling into town soaking wet we discovered that this was their off-season, so almost every hotel or lodging was closed without a campground in sight. It was getting dark so we stopped at one of the only open restaurants with a place where I could keep the bike in sight, McDonalds, FREE WiFi. We pulled up google maps and found an inexpensive hotel right next door. The only parking was on the street so we waited until a spot opened up, grabbed it and were in for the night. 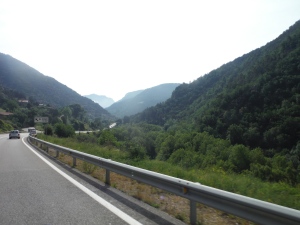 The next morning we buggered out and headed for a campground on the Mediterranean, Camping Pola, Giverola on Cala Pola. The ride down to the coast out of the Pyrenees  was great this morning, it was dry. We were able to zip down through the twisties from elevations of 1500 meters down to the coast which reminded me of the Pacific Coast Highway along the California coast with forested elevations looking down on beautiful, wild beaches and the blue waters of the Balearic Sea off the coast of Spain.

We found space to camp right on the water in a small cove called Cala Pola. The water was a little chilly and got a little rough so we stayed out. The grabbed a liter bottle of Spanish Red wine and a bottle of Sangria for $0.99, can you believe it’s less expensive than water. We drank the wine with some peanuts and then headed to the restaurant for a great, very inexpensive meal and spent the rest of the night down by the beach enjoying the quiet, interrupted by the occasional wave lapping the shore.

In the morning I noticed the rear brakes were in need of changing so we rode into Barcelona looking for a bike shop. We found a small family shop who got the brakes for us but couldn’t put them on for us because it was lunch time and they were closing for three hours. Ugh! Later that day we found a car shop with a motorbike shop upstairs to help. The shop was filed with old dusty bikes from the 60’s and 70’s, some covered, but I got a chance to look them over. They had an Ossa, Hodaka, Bultaco and one small bike with a big, water-cooled V-8 engine.

With fresh brakes we headed toward the Santa Maria de Montserrat Abbey, NW of Barcelona. It had just finished raining when we arrived so the ride up the tight, twisting road was more fun than it should have been. By the time we got up to the monastery it was later in the day so we just snapped a couple pictures and kept on going.

We rode toward Montblanc looking for a campground and found one, almost empty, just closing with a small restaurant for pizza. The grocery store in town had inexpensive red wine, surprise, so a bottle and pizza and I was set. The rain found us again most of the night and we woke in the morning to a flooded campsite and rain still coming down. Since a bathhouse was nearby we broke camp and dried most of the gear under the hand dryer.