The Nicaraguan border is complex, to say the least.  As we near the border we see the “helpers” milling about watching our arrival, then circling in for the kill.  It all starts off innocent enough.  They start helping you figure where to stop first.  We are trying to politely tell them “no gracias”, but they just continue to help, even if it’s not necessary.  This border between Honduras and Nicaragua is the most unorganized crossing I have ever been through.  Nothing is marked or in any kind of order.  One of the policeman needed for Gypsy’s paperwork was sitting in a chair in the parking lot.  The helpers work quickly trying to help you through the maze of places to visit and deal with each step, and helping you to part with your money.  Having a trailer being pulled by a motorcycle without a tag or registration, it’s homemade and has never been tagged or registered, threw a wrench into the system, something you don’t want to do at this crossing.  The day was clear with blue skies overhead and a gentle breeze moving the 40°C air and diesel exhaust fumes throughout the area and the buildings.  We had arrived by 8am and we finally left the area after 4 ½ hours of this running from building to building, handing over fistfuls of money for the “business”.  At one point as we were discussing Gypsy I said it the officials, “Just f%@k it, I’m going back to Honduras”.  Melanie calmed me down and kept me focused, as she has ulterior motives, which will be in the next chapter.

Our Nico stamp was for 30 days but we zipped through the country.  We stayed a night in Leon then headed for Parque Nacional Volcán Masaya, an active volcano southwest of Managua.  We rode to the top of the crater on our motorcycle and were told to back into the parking space to enable us to make a hasty escape if the need arose.  Hummm, OK. 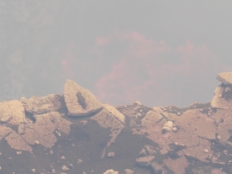 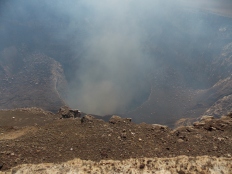 The smell of sulfur filled the air as we neared the edge of the crater. Looking over the edge you could see smoke billowing out as the fiery molten lava below bubbled and crackled noisily below us.  The clouds of steam cleared occasionally giving us views of the lava which was quite the site.  To the left of us was a trial that would go to the upper observation area, but it was closed due to the increased activity of the volcano. 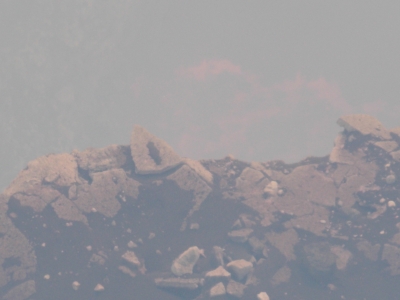 The next day we headed toward the island of Ometepe, in the middle of Lake Nicaragua. We wanted to spend a couple days there as the views are dominated by two large volcanoes. The island is the combination of two volcanoes, one on each of two connected land masses.  The winds are quite strong when we arrive forcing the ferries to stop running with a full schedule for a couple days.  We find a hostel near the water for the night and head to the Nicaragua/Costa Rica border the next day.  Same confusion and frustration at this border also but not as expensive. All total it cost me almost US$400 to get through Nicaragua with my motorcycle, pulling a trailer and with our dog, and 7 hours of my life. Not worth it, but had to get through it.