After my great 60th birthday surprise we headed back to San Ramon and see Donna for a few days before heading back north. Just up the hill from Donna’s place live Joe and Helena, a couple expats that now live in Costa Rica.  They have a great bar in their home, the El Cordero Negra, AKA “The Clandestine Pub”. This place has a great atmosphere, good brews on tap and my favorite Scotch, Laphroaig, from the Isle of Islay. (Side note, I am visiting them to collect the rent on my property there this summer.) We had a great evening sampling beer/Scotch and talking about all sorts of things travelers talk about. 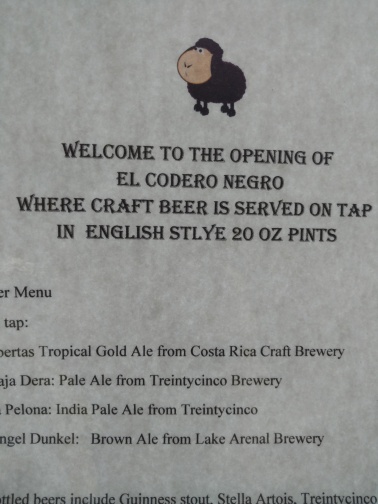 the El Codero Negro, or the Clandestine Pub

Views from the deck of Angel Valley 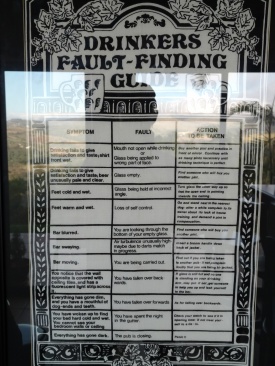 A few days later we headed to the border and stopped at a great place at La Cruz. This town is a few miles from the coast but as I rounded the corner coming into town the views of Salinas Bay on the border of CR and Nico were amazing. We found an Airbnb in town for $17 per night, fantastic place and owners and just a short walk into town to Mirador Punta Descartes, a neat hostel with million-dollar view, a bar and good food. The beach was a few miles away so we spent an extra day exploring the area and swimming in the blue waters of the Pacific. 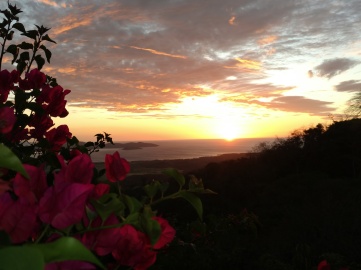 The crossing into back Nicaragua sucked like expected talking several hours and costing more than it should. We decided to cross over to Ometepe Island in Lake Nicaragua and found a hostel, Hospedaje Soma, (hospedajesoma.com) owned by a couple expats. They figured out how to run a good hostel as everything is run on the honor system, just pay when you leave, very European. Ometepe Island is composed of two small islands connected on the edge like two eggs in a frying pan, the yokes being two large volcanoes, Volcán Conceptión and Volcán Maderas. We rode over to the smaller island and to a natural swimming hole, Ojo de Agua. This is a great shaded area around a developed natural swimming hole with a restaurant and refreshments served to you as you sit in the provided chair at the water’s edge. It was very relaxing as we swam, chatting with many other travelers with the same idea.

On the ferry to Ometepe 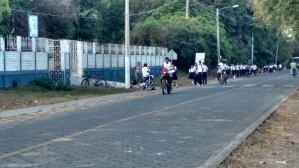 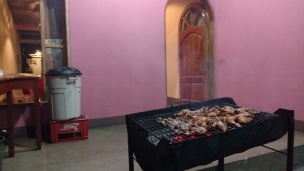 Our next border crossing from Nicaragua into Honduras turned into a bad dream, souring us from returning to Nicaragua again. My trip to South America will be a flight into Columbia for us and our bike next time. It all started off Nico normal with the onslaught of fixers wanting to help you get through the perplexing mess of incompetence and corruption that they accept. Again, the trailer and Gypsy were an issue so I handed over my documents to the head fixer and away we went looking for the most corrupt guy in the complex. At a snail’s pace progress was made until we finally got everything was finished, except for the crossing. As we got back to the bike and Melanie our guy jumped on a scooter and took off with our documents and the others said to follow him to the border.  We quickly geared up and followed to where he was waiting to watch him continue about two kilometers and pull in to the side of a patrol station where he was joined by three of his friends. Demanding money for the return of my documents the four men became aggressive at an area that seemed to be familiar with this type of behavior as the station attendants ignored us and our plight. We handed over some cash and they were demanding more, suggesting I return to the border and get more cash. My limit had been crossed and I got aggressive yelling at them and letting them know what and where they do and go. They did back off and gave us our documents back and we left. In total, we crossed the Nicaragua border four times with a terrible and frustrating experience each time we crossed. My suggestion if you ever head that way is to travel simply and never use a fixer for anything there. To me, Nicaragua was the least favorite country I went through and I will probably never return, opting to fly from the US to Columbia when I continue my trip south through the Americas.

We rolled back through Honduras stopping in Copan again to see some friends. While we were wandering around town we came across a nice steak house, the Carnitas Nia Lola. They would cook your steak over a wood fired grill inside the restaurant as you were watching. It was a funky restaurant with a bunch of US memorabilia around, including HD posters. We had an excellent meal for our last night in Honduras.

The next day we crossed into Guatemala wanting to stop in Antigua since we missed that city on the way south. Antigua is a wonderful city and easy to visit. We wandered around the downtown square watching families and tourists mingle and enjoy the wonderful weather and views from the city. 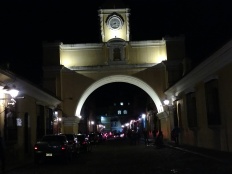 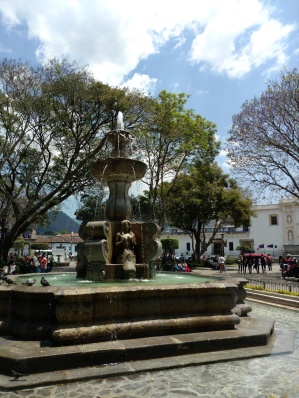 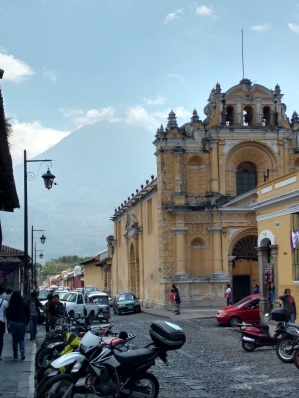 I was approached by several young boys carrying a shoe shine boxes who thought my terribly dirty boots needing sprucing up a bit. Finally giving in I sat down as my chosen one sat in front of me and worked through the caked-on mud, rubbed black polish on with his hands and proceeded to polish my boot with a snap of his polishing rag to a spit polish shine on those old boots that any military person could have been proud of.

We had been informed of a place called the Londoner Pub where overland travelers seemed to gather for good English pub fare and live music. As we sat eating rather good fish and chips and enjoying the entertainment some guys, Moritz Alexa, Phillip Berini and one other, walked in and up to the bar. They were obviously motorcycle riders from different countries, so we joined them and had a great time drinking and telling stories of the road. As a PS, we met up with one of the riders, Moritz Alexy from Germany, at the Overland Expo West in Flagstaff, AZ a couple months later. We had a great time telling various lies from the road and finally called it a night while we all could all still stagger back to our hotels.

2 Up With a Pup, welcome at the Londoner Pub

Friends from the road

Headed to Mexico tomorrow, so…