Crossing back into Mexico from Central America is as easy as crossing from the United States. Navigating the throngs of people selling and buying things you will probably never need is tricky as people are like big rats moving everywhere, crossing as soon as you pass. Watching my mirrors as much as what’s in front of me I stop just in time as a person tries to cut just at the rear of our motorcycle and almost into the trailer that they never saw.

Today we are on our way to Palenque despite the warnings of men on the road stopping traffic looking for money. This has been a warning since we entered Mexico, not to ride the south route into Palenque. We bypassed this road the first time through but want to see a couple of things up this road so we are going that way today. 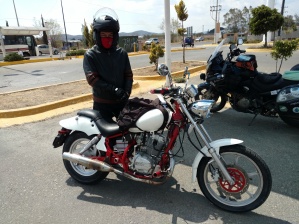 Stopping at a Wal-Mart that a small customized motorcycle and a rider with a black jacket and patches pulls in right behind us. He had seen us coming into town and followed us to the Wal-Mart. Slowly getting off his bike and taking off his helmet we greet in Spanish and realize quickly that neither of us speak the others primary language. He is there to say hi and offer us any assistance we may need in the southern part of Mexico. Exchanging email addresses and telephone numbers he gets back on his bike and rides away promising to be there is and when we may need anything. He tells us there have been reports of several men on the road north, but no reports today.

Heading out of town toward Palenque we round every corner tentatively as if the devil himself would be waiting for us. The road’s condition continues to deteriorate with every mile with wheel eating potholes and chunks of pavement missing. Since we have not seen anything yet and we are over half way there we start to relax. Rounding a corner half of the road is missing and there are the men stopping traffic at the perfect roadblock. Half of the road is missing, which is our lane, with a drop-off and the other side is the mountain.

There were orange cones and large rocks up directing traffic around the wash-out and around the immediate area were about 8-10 guys with machetes. It didn’t take long to realize that these were the banditos we had been warned about. While we were waiting our “turn”, two little kids came over to us and tried to sell us something to eat. First a truck in the opposite lane went through and paid. Following the truck, a car went through, then the cones were moved back into place in the middle of the road, wide enough for a bike to go through, but maybe not the trailer. We entered the cones where the guys were standing and I hit the gas, thinking FUCK YOU GUYS, I”M NOT PAYING. With the guys yelling, machetes waving and rocks whistling through the air (watch the guy on the left as we ride past pick up a rock), we roared off. So, this was our excitement today. The road sucked with topes and missing sections of road all the way out to Palenque. It took over 6 hours to ride only 190 kms.

As we quickly ride through corners the chunks of missing pavement go to whole lanes and we bounce and skid and slide through the turns making sure we aren’t being followed. Pulling into Palenque we are happy to see our hotel is in the jungle with only one-way in. Recounting our story to the reception desk we find out this is common here and we aren’t the first ones to have run this blockade.

We ate at the hotel’s on-site restaurant tonight amid the evening cries of birds and Howler Monkeys, an eerie sound in the darkening day. Tomorrow we will be taking a tour bus to Aqua Azul Waterfalls, Misol-Ha Waterfalls and Zona Arqueológica ruins. We want to swim and the pavement is more of a challenge than I want to do two days in a row. 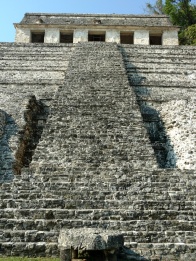 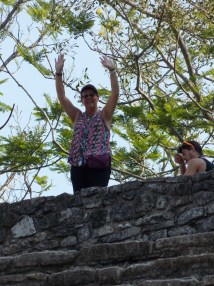 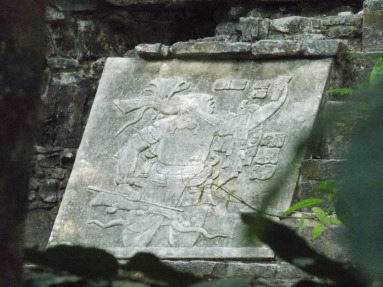 Aqua Azul Waterfalls, (Spanish for “Blue Water Falls”), consists of many cataracts following one after another. The larger cataracts may be as high as 6 meters (20 feet) or so. 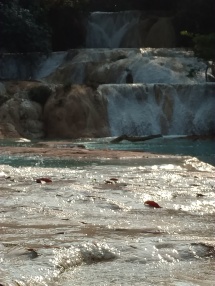 Misol-Ha Waterfalls is one single cascade of 35 m of height that falls into a single almost circular pool admits tropical vegetation. The water is of clear blue color due to its high mineral content. Behind the cascade there is a cave of approximately 20 meters in length. 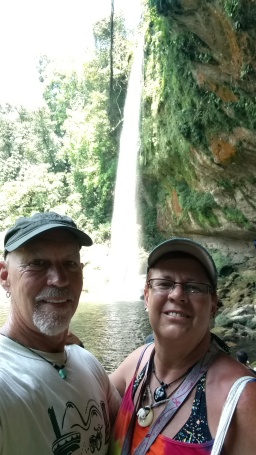 Leaving Palenque our next town will be Taxco but we end up staying in a couple other towns along the way with nice little hotels and even nicer hosts and a couple memorable meals when it looked like there was nothing else around. The first was a little street side kabob run by a small family with each of the three having their own distinct duty, the father cooking the meat street side and the mother prepping the food. The seven-year-old son was the host seating the patrons as they arrived, taking orders and attending to the needs of the customers. A more polite and responsible boy would be difficult to find. Such is Mexico, all family members working together.

The next night we found a hotel high up on the bluffs overlooking the town. The drive up the hill was actually one of the steepest we had encountered on the entire trip. Cursing silently, we continued up the hill because stopping would have probably meant a backward slide and an unwanted get off. The views from the top made the ride worth the trip with panoramic views of the city below in the sunset. The elegant restaurant with fireplace was a definite plus and the meal was good and inexpensive.

Taxco, the city of silver. Taxco is built into the side of a mountain so a flat, straight road is impossible to find. Our hotel for the next couple of night is a spa and up a couple very steep roads with sharp corners where if you had to stop one leg would find nothing but air between the bottom of your boot and the pavement. Melanie wanted off so she took Gypsy and told me when the busy street crowded with VW bug taxis was clear so I didn’t have to stop. One wrong turn led to a multi-point turnaround with my trailer as I blocked traffic full of very patient drivers.

The city of Taxco was heavily associated with silver, both with the mining of it and other metals and for the crafting of it into jewelry, silverware and other items. Today tourism has replaced silver as the main economic activity.

Exploring the compact, hilly city is the easiest way and then when sufficiently lost, a VW taxi is always waiting to take you back. There are several churches with amazing histories all within view of the back balcony of our hotel. The owner spoke great English and grew up in Taxco. He was very proud of his homeland and took time away from his day to point out the places to visit from the balcony viewpoint. He shared with us that he had grown up in this very building, an orphanage at the time. Having great memories of growing up, when it came up for sale a few years ago as an inn, he couldn’t resist purchasing the place for his own. 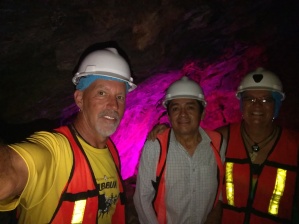 One of the highlights of a visit to Taxco is the newly discovered abandoned mine. One of the hotels, the Hotel Posada de la Misión since 1940, was doing a remodel of its bar three years ago. After digging up the tiles in an area of the bar they arrived the next morning to discover the tools they had left on the exposed dirt were missing, through a small hole in the excavating area. Researching the hole further revealed an old mine with existing veins of gold and silver. The tour is very cool you descend in an elevator down four stories and hike down to a depth of about 150 feet. If you are feeling energetic you can also rappel 300 feet to the bottom. This is a great tour full of history and to find this mine directly below the hotel and city is amazing.

Tomorrow, through the middle of Mexico City.