Today we headed to Loch Ness, hunting for Nessie, the Lock Ness Monster. All we found were scary tourists clumped in pods of buses. We headed south to a loch that had been described as perfect, Loch Morlich. This was a small loch circled with wood, trails and mountains accompanied by a secluded campground. The wind and rain were again a bother that found us unable to cook. Luckily there was a nearby adventure center with good food and new to me Scottish ales. 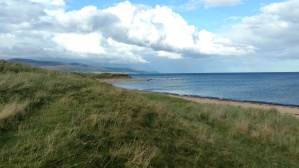 One of the first stops was at the Singleton distillery. They have several distilleries in the highland area, each offering a different tasting Scotch Whiskey and each sold to a different market. The one we were visiting and about to tour offered Scotches that were to be sold in the Asian market and not available any place else in the world, except at this very distillery. The tour was fantastic giving us insight into how these Scotches were distilled. The end of the tour led us into the basement storage facilities to see whisky being stored in used barrels, oak barrels from Bourbons in the US and barrels used in Portugal to store Sherry, each giving its’ own unique flavor to Singleton’s Scotch, each being stored for a minimum of 12 years.

As we drove west in the morning, along a back track we saw sign pointing to the resting place of the infamous Rob Roy. After a crazy route we finally found the Balquhidder Church, the old and the new. The ruins of the old church sat at the foot of the Rob Roy burial site covered in green moss while the scents of old, wet and moss permeated the early morning misting. Another couple and I searched the grounds for the elusive gravesite which we finally located. The newer church was open, they all seem to be, so we unlatched the heavy wooden door with a turn of the black metal handle and a clunk of the old metal latch. The interior was cool , smelled of old dampness hanging in the air and was dimly lit, but, beautiful in it’s simplistic small country church way. 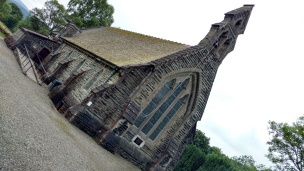 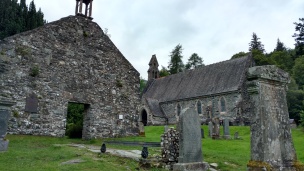 After a great night sleep and waking up to blue skies we headed back again to Glen Coe. This area was so beautiful we wanted to see it again, without the rain. As we entered Ben Nevis, in the rain, we decided to stop at their Scotch distillery, after we had already passed it. We turned around and went back just to look around. I bought a small bottle of their 12 year old spirit and was leaving when the guys convinced us to stay for a private viewing of the film they show on the tour. 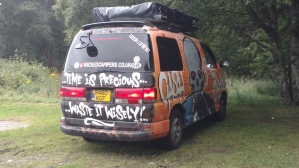 Time is Precious…Waste it Wisely 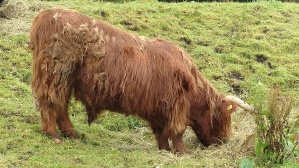 Campground on Loch Morlich. Check out the chimney

After the film as we were headed out, Melanie turns and says ‘Martina’, thinking she has seen a friend of ours. Well, sure enough, it’s Martina and Dylan Wickrama. We met them a couple of years loop prior at a Horizon’s Unlimited event in Virginia. Dylan is well known in the overland community for his adventure and book, “Where the Road Ends”. This is about his RTW adventure and his sailing on a homemade raft around the Darien Gap. If you haven’t read his book or seen his presentation, please do. We say and chatted over a cup of coffee while they waited for their distillery tour to begin. 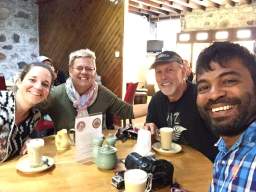 We passed through Glen Coe again in the rain but due to the rain the waterfalls were everywhere, some three and four tiers as they cascaded down the mountain.

Heading back across Scotland we got to the motherland of the world of golf, St Andrews. Arriving to the town we find much more than a golf course. The town has a beautiful old cathedral and castle standing on one end of a lovely town. From the castle you see outside tables lining the main thoroughfare with working people and families on holiday sitting in the morning sun enjoying breakfast and a Cappuccino or tea. 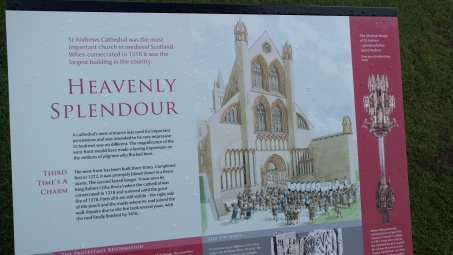 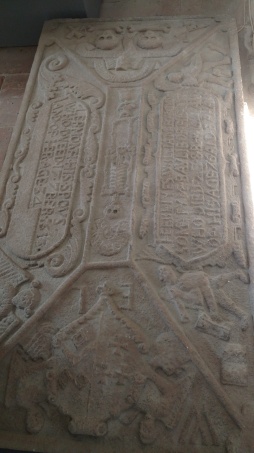 The St Andrew’s Cathedral was built in 1272 and is surprisingly intact having survived many attacks and storms. We ventured in to take a tour of the grounds, museum and tower. Walking up St. Rule’s Tower on the dimly lit, circular well-worn staircase with 164 steps we were rewarded with incredibly views of the city and golf course in the distance. 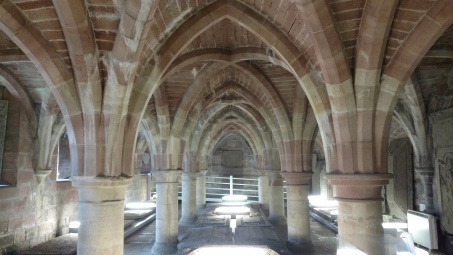 After watching so many Open Championships with my Dad it was sort of eerie to finally walk the grounds of the old course. Melanie and I took in a round on the Himalayan course, also known since the late 1800’s as the woman course. We had a great time putting around this 9 hole putting course with the winds howling of the sea in typical St Andrew’s fashion. 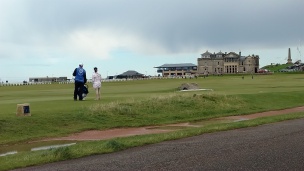 After our strenuous game of golf we headed to Edinburgh, looking for a place to camp for the night. We got stumped at the first site but they had typical US sites with only 1 tent allowed per pitch. On other campground was located on the south side of town with plenty of £30 sites available (ouch). 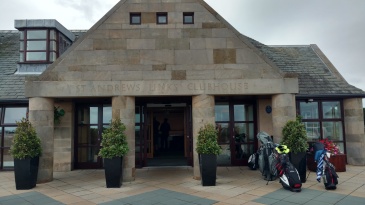 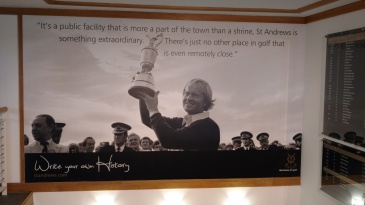 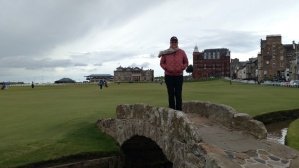 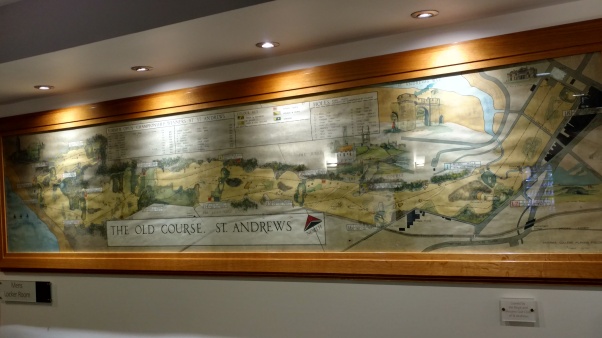 Tomorrow is Edinburgh, Tattoo, Whiskey and the whole experience. We’ve been working on getting here for 10 years on now we are here.

Till next time… Cheers 2WANDRRs