Oh, the lines! The Chinese New Year has everybody flying somewhere. We finally made it to Siem Reap, Kingdom of Cambodia with short lines, incredible efficiency and smiling people greeting us as we obtained our visas.

Our first day here we walked the town and enjoyed making new friends and talking to everyone. Finding a street side seat to watch the show was reminiscent of a Mardi Gras/Key West scene. We had a blast, this is a fun city. 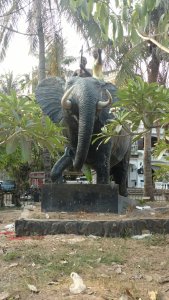 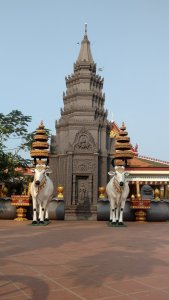 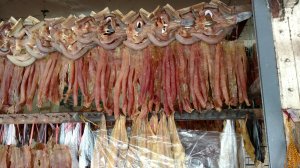 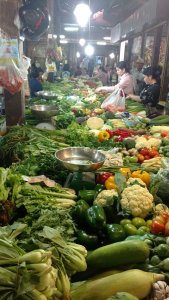 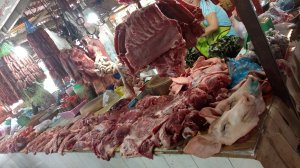 Any body hungry? I just became a vegetarian. 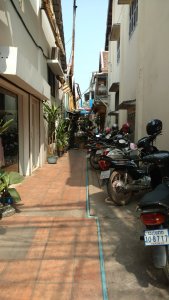 On the flight from HCMC to Siem Reap we met a well traveled couple from Toronto visiting the area. We decided to get together downtown with Sandy and Pravn for drinks, food enjoying each other’s company. Every once in a while it happens and we all hit it off becoming fast friends. Such an enjoyable evening.

The next morning the alarm went off at 4 AM for our sunrise tour of the main temple, Angkor Wat.

Angkor Wat is a temple complex and is the largest religious monument in the world. It was originally constructed as a Hindu temple of god Vishnu for the Khmer Empire, gradually transforming into a Buddhist temple towards the end of the 12th century. Angkor Wat is also a protected UNESCO World Heritage site.

The streets were alive even at that time of the morning with the street vendors heating their cooking coals for the day, TukTuk’s waiting for passengers and vehicles of every shape and size, all heading for the temples.

We arrived at Angkor Wat 30 minutes before sunrise and gathered with hundreds of people in front of the reflection pond awaiting what was to be a beautiful sunrise. We all stood and watched in awe as the night faded and the incoming day tuned the pinks to a beautiful sunrise with cameras clicking away. The sounds of drums beating softly in the distance competed with the vendors selling their beautiful wares while the smell of fresh brewed coffee filled out senses. 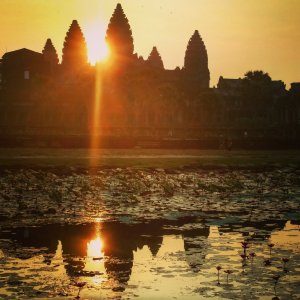 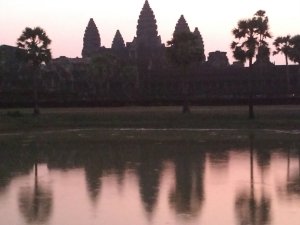 We briefly toured the Wat and continued on to see the other temples before the afternoon heat and heading back to the hotel and an afternoon at the pool. 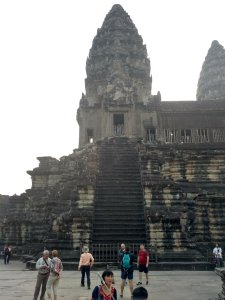 Stone carvings. Look for the seam in the joined stones. Amazing craftsmanship! 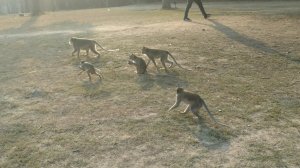 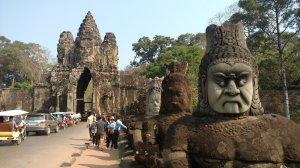 That afternoon at the pool we meet two couples from Queensland, Australia and, after talking for a couple hours, invited them out for drinks (US$0.50 drafts beer and $1.00 mixed drinks) with us and our Canadian friends. What a fun evening we had, walking the streets drinking and eating Pizza.