Some Reap, Cambodia to Phnom Penh

We spent the next couple days wandering around town and revisiting the Angkor Wat complex of temples. The first time we were there the buses all arrived after sunrise and the complex got so crowded I couldn’t stay to see some of the other temples. It was Chinese New Year this week and the Chinese were here visiting by the bus load.

One of the temples, Ta Prohm, is in pretty much the same condition that it was found. It has been on the UNESCO list since 1992 and is now the most visited temple in the complex. The surge in popularity is in part due to being in the movie Tomb Raider, starring Angelina Jolie. 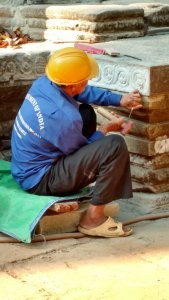 The jungle will always win

You walk toward the temple on a path encompassed in a dense jungle. As you near the temple the dense jungle foliage has been trimmed back, but the large trees that have attempted to swallow the temple are still in place, soaring to hundreds of feet with their bases still rooted in the stone as the European explorers would have found them.

One of the most famous spots in Ta Prohm is the so-called ‘Tomb Raider tree’, where Angelina Jolie’s Lara Croft picked a jasmine flower before falling through the earth into…Pinewood Studios. 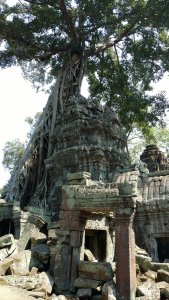 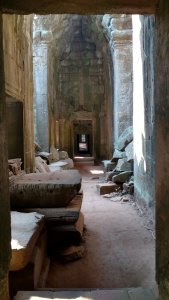 We ended up changing hostels the next day to the Overflow Guesthouse. There were a group of seven young adults also staying there on the Worldrace.org , on a multi- denominational Christian mission that led them around the world over a nine month period. Have a great time, team Y.
The next afternoon we had to check out a hostel called the Funky FlashPacker. It’s known as a party place and it lived up to it’s reputation.

Melanie and Anna from England

A couple drinks in and we were part of the fun, sorta like fun grandparents. We each had a double shot of a boiling drink (maybe baking powder) followed by a Red bull Jägerbomb.

Even Melanie added to the world score card with one. 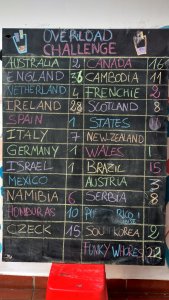 We finally were ready to move on and booked a fast boat down the Tonlé Sap into Phnom Penh, a 7 hour boat ride. After strapping the luggage to the top of the boat and finding a seat we headed to up to above deck to sit on the roof.

Luggage strapped down, people not.

There were no railings on this boat so your safety was pretty much on you. With the long skinny boat underway and up to speed, about 40 kts, the boat was somewhat stable but would tilt way to the side with any change of course from straight. Amazing enough, no one fell off! 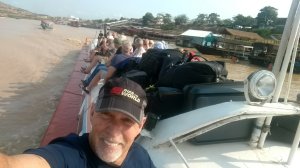 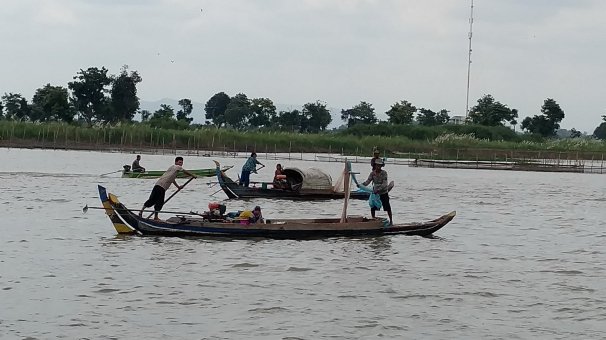 In the middle of the enormous lake there was nothing but water in all directions. As we neared the delta the water got so shallow I could have walked.

The sides of the river slowly closed in and with the deeper water we got up to speed again. Passing the floating villages, fisherman in small boats and stilt houses on the water’s edge have you a feel of the humble life the Cambodians lead that live near the water. 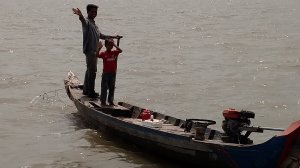 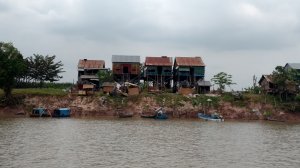 City on the river

We finally arrived in Phnom Penh in the late afternoon, found a hostel, and headed downtown on foot.

The palace was an enormous compound with a large park in front leading to the river. This joined up with a boardwalk running along the river.

Temple by the river

Hundreds of families, couples and monks all shared the space enjoying each other’s company.

Faces were all with smiles with kids and adults waving and saying hello as we strolled the same common areas.

Enjoying the Riverwalk at night

It’s always so wonderful to see such happiness, especially knowing that 40 years ago, 3 million Cambodian people of a population of 8 million, were killed by the Khmer Rouge.

But that’s for the next time.