Cambodia and the Khmer Rouge

We have visited many areas and monuments in the world dealing with the inhumanity that other humans impose on each other for so many different reasons. This was among the top of the sites that have emotionally drained us. This post is heavy with photos at the end, they tell a story.

The ones I am going to talk about are the Choeung Ek Genocidal Center, or the Killing Fields, and Tuol Sleng Genocide Museum , the S21 secret prison, a former high school.

We rode out of town about 16 kms on back roads to get to the Killing Fields. The ride is interesting as we pass what seems to be a continuous village of smiling and waving people. It’s difficult to believe almost 40 percent of their population were brutally killed just 40 years ago.

As you arrive at the Killing Fields and pay your entry fee you are facing a long flowered and treed walkway leading to a 62 meter tall, glass walled Buddhist stupa, filled with more than 5000 human skulls, all facing out, staring blankly and looking into the souls of all who enter.

This killing field is one of over 300 mass graves that dot the surrounding countryside. It was once an orchard and a Chinese graveyard with proper stones scattered amongst the mass grave mounds.

During the years of 1975 (end of the Vietnam/American/2nd Indochina War)-1979 with Cambodia at it’s weakest from damage done from the Americans, a communist ruler took over. His name was Pol Pot an he promised safety and prosperity to the country. Until 1979, the Khmer Rouge executed those they believed represented the”old society” that included intellectuals, merchants, Buddhist monks, former government officials and former soldiers. In addition, they targeted members of Cambodia’s ethnic minorities. Half of the Chinese living in Cambodia at the time we’re killed, as were about 90,000 Muslims of the Cham culture. Vietnamese residents were either expelled or murdered. He ordered all those people and their entire families, killed because they could seek revenge. First they would be tortured to admit their crimes against the regime, then they would be brutally murdered, because bullets were too expensive.

The small children and babies became sport as they were tossed in the air or their heads brutally smashed into what is now known as the killing tree. They were then tossed into a shallow mass grave nearby.

The mass graves here contain 8,895 bodies. It is believed that during the 4 years of the Khmer Rouge, 2.7 million of a remaining population of 8 million were killed, directly and indirectly. During the Vietnam War many Cambodians fled the countryside where the bombs were dropping. More were dropped in Cambodia than all of WW2. They fled to the cities. When Pol Pot took control of the cities they fled to the country or were placed in work camps and died there.

With knots in our stomachs we then continued to the next must visit, Toul Sleng, the S-21 secret genecide museum. This was the holding area where all prisoners we’re brought to be tortured into false confessions before being brought to the killing fields for their final breaths.
After Cambodia lost the Cambodia-Vietnamese War in 1979, Pol Pot relocated to the jungles of southwest Cambodia, and the Khmer Rouge and its government collapsed. From 1979 to 1997, he and a remnant of the old Khmer Rouge operated near the border of Cambodia and Thailand. Pol Pot died under house arrest in 1998.

Nothing more to say.

Mass grave with memorial in the background 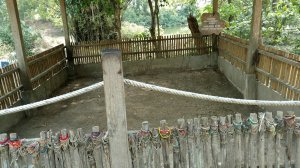 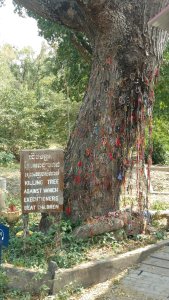 The Killing Tree with the genocide memorial in the background

Small bones and teeth that still surface in the rains

Many levels of brutality 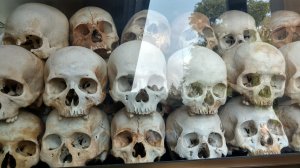 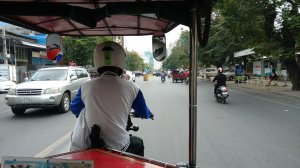 Our driver had many family members die here 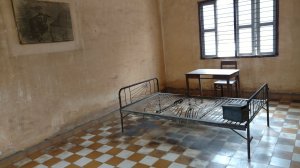 Torture room that was once a room of learning. Blood still stains the floor. 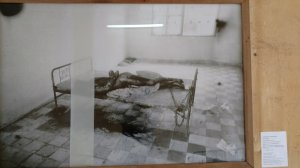 Chains and blood still on the floor 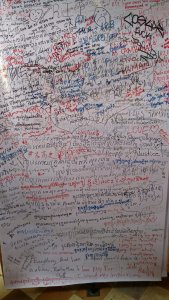 Notes from around the world bypassing religions and politics. Hope for the good of humanity. 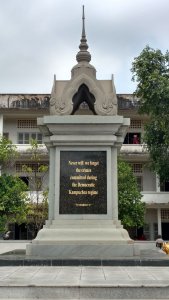 If you try to erase what happened you will make the same mistakes again.