We crossed back into Albania and the great road, went to shit. It became tight and narrow, blind curves, major sized potholes (southern Honduras), then dirt and gravel. As we just ride slowly along with the absence of traffic on the only road from this point north, I thought I had taken a wrong turn somewhere. 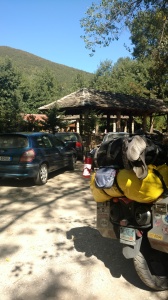 Coming around a corner and we happened upon a camp and great restaurant. We sat at a table and are hungry, as usual. They have a fish farm right there. I order the trout, as do a couple Germans sitting at a table next to us. Our waiter places our order, a man comes out of the kitchen and dips his net into the water retrieving three wonderfully looking trout. Mine was delicious, as were the others since bones were the only leftovers.

Again, we got lost trying to find the small border rounding Lake Ohrid into Macedonia. Lake Ohrid is one of the oldest and cleanest lakes in the world. The next day we took a boat ride on the lake (which lasted longer than advertised). It was a beautiful day to visit some of the sites around the lake. But the reason for going here was to visit some friends that were arriving to Ohrid also. The famous riding duo, the RTW riding pair, all the way from Australia (again), Ken and Carol-Ann Duval. ;). 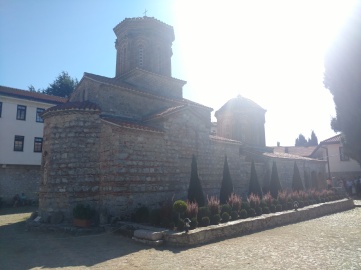 We got back to the hotel to find them and their familiar looking BMW 800GS waiting for us. Chatting it up our group headed down to the marina in search of beer, food and, more beer. A stage was set up just off the marina and we stopped and watched the Macedonian dance troupe for a few minutes before continuing our quest for beer and food. Both were found at a nearby restaurant with seating outside on the sidewalk watching families do what they should be doing, enjoying each others company. It was good as always to catch up with them. 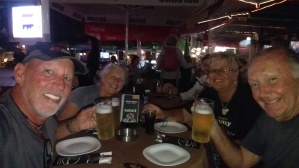 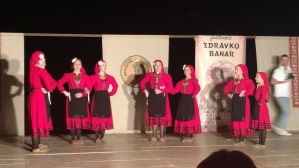 After a good meal, wonderful conversation and probably too many beers we headed back to the hotel. In the morning we were packed and off to Greece again. After a couple hours we pulled into a fuel station to fill up our gas tank and have a coffee. While we were drinking our coffee a couple bikes showed up. Then a couple more. Soon the parking lot held several bikes of a Macedonia Motorcycle Club, POTFAT MC. We were at a small table inside and they were all seated outside at a couple tables. The club leader came in and approached us and wanted to know if we would like to come outside and share their tables. Of course we would. We spent an fun and interesting hour with the group, which included a female pillion. They were all meeting for their Sunday ride somewhere to get something to eat. The club leader wanted me to have a club patch, which I accepted, and will have sewn onto my leather biker jacket back in the US. Getting ready to leave, we all had to get pictures in the parking lot in front of the bikes. 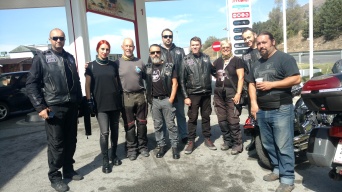 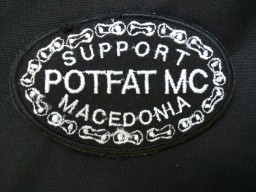 With great roads south (a different route) the day ended at a campground with views looking up to the towering monasteries of Meteora. But that will be in the next blog.